We may earn commission from links on this page, but we only recommend products we believe in. Pricing and availability are subject to change.
Rick Broida
Updated 2 August 2022, 9:44 pm·8-min read

When a friend recently asked me for TV buying advice. I gave it, then asked, "And what are you doing for audio?" His response was typical: "Doesn't the TV have speakers built in?"

Ay-ay-ay. This is akin to buying a fancy sports car equipped with go-cart wheels. Of course your new TV has speakers built in, and it might even support high-end audio features such as Dolby Atmos. But those small, down-facing drivers can manage only so much. For the best possible experience, you need a soundbar, subwoofer and satellite speakers — also known as a 5.1-channel surround system.

Recently I tested the Majority Everest Surround Sound System and found it a very good solution, due in no small part to its simplicity. You might not be familiar with the brand, which is UK-based, but you should definitely consider the product. 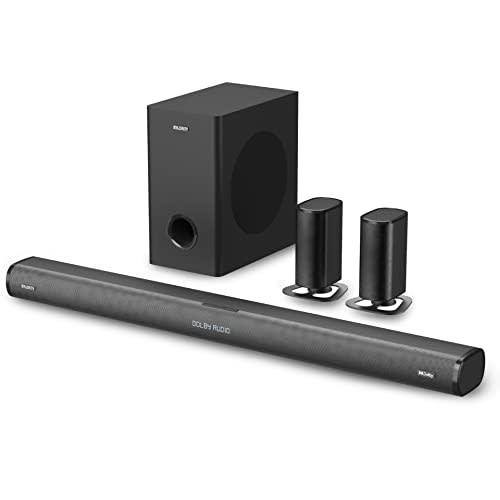 The Everest effortlessly adds 5.1-channel surround sound to your living room. Just plug in the satellites and subwoofer and you're done.

The Everest is about as plug-and-play as these things get. It's almost completely wireless, meaning the subwoofer and satellite speakers require nothing more than proximity to an AC outlet (though the latter are also rechargeable; more on that below). The main sound bar requires AC power as well, of course, but also relies on an HDMI cable to plug into your TV.

Why not use Bluetooth to take one more cord out of the equation? You can, assuming your TV supports it, but it's not the best option: Bluetooth is a compressed-audio technology, so you won't get optimal sound, and it can suffer from connectivity and latency issues. You won't get true 5.1-channel surround, either.

Speaking of surround, the satellite speakers are more versatile than most. You can go the standard route and just plug each one into an AC outlet, which is what I did. However, if you don't have outlets to spare, or they're not conveniently located, or you just don't want unsightly cords mucking up your decor, you can opt for battery power: Each speaker is rechargeable and good for up to eight hours, according to Majority.

The satellites can recharge via their AC adapters or by docking on either side of the sound bar. (You can also leave them docked permanently if you don't want rear audio, which some people find disconcerting.) I don't recommend the dock-to-recharge option, as it's a lot of hassle: You have to remove (and keep track of) plastic covers from each end of the bar, as well as remove (and keep track of) the stands from the bottom of each speaker. Much as I like the idea of completely wire-free rear speakers, in reality it's probably more trouble than it's worth.

Here's how my setup went: I plugged in the sound bar and connected it to the TV's HDMI-ARC port. (ARC stands for "audio return channel," and among other things it allows your TV remote to control the sound bar's volume — very useful.) The TV was smart enough to detect it and adjusted its own audio settings accordingly. (Your mileage may vary.) Meanwhile, I plugged in the subwoofer and satellites; after a few seconds they automatically connected to the sound bar. Presto, done. It was that simple.

It's lucky this all went so smoothly because Majority doesn't supply a printed instruction manual, and I couldn't find the "welcome guide" that was supposed to be in the box — the one that would steer me to the online version of the manual. My advice: Peruse those instructions before you even unbox the system, and keep it close at hand during setup.

Night and day. That's how I describe the difference between TV speakers and 5.1-channel surround, and the Everest lives up to that comparison. You not only get the benefit of sound that fully encompasses you, just like in a movie theater, you also get bigger, louder, richer sound. Deeper, too: The Everest subwoofer definitely brings the bass, which is crucial.

My favorite way to test sound systems is by playing the office-building lobby scene from the original The Matrix. It has everything: Guns blazing, bullets whizzing, concrete exploding and, beneath it all, a deep, pulsing bass rift. The Everest brought that scene (and others I watched, from movies like Skyfall and The Mitchells vs. the Machines) to life in a way that built-in TV speakers simply can't. Credit the 300 total watts of audio power packed into this setup.

The Everest's remote is a surprisingly crowded one, but in a good way: There are separate buttons for every mode, input and more so you don't have to cycle through various options to find the one you want. I especially love that the Everest remote offers individual controls for front, center, surround and subwoofer volume levels.

Unfortunately, the system did reveal a few usability issues. For starters, although the sound bar and subwoofer power up automatically when the TV does, the rear speakers don't; you have to press the corresponding power button on the Everest remote. This is true of some other systems as well, but I'm spoiled by my Roku Streambar Pro, which doesn't require this extra step. (On the other hand, it costs nearly twice as much.) One possible workaround, at least if you keep them connected to AC power: Just leave them on all the time. The power draw should be fairly minimal.

Functionally speaking, I like the LED status display on the front of the sound bar; it shows the currently selected input and the volume level. However, it's on the bright side, which can be distracting when you're doing lights-out movie night, and there's no way to adjust the brightness.

Another minor bummer: Because there's no HDMI pass-through on the sound bar, you can't incorporate this into a larger home-stereo setup. I suspect anyone looking to do that would probably aim for a higher-end system anyway.

Indeed, I think the Majority Everest is for homeowners and apartment-dwellers who want a really good audio upgrade without a lot of hassle — or expense. Plug it in and presto: You've got loud, crisp, deep 5.1-channel surround sound that will seriously elevate your TV experience. Once you've made the change, you'll never go back to built-in TV speakers. 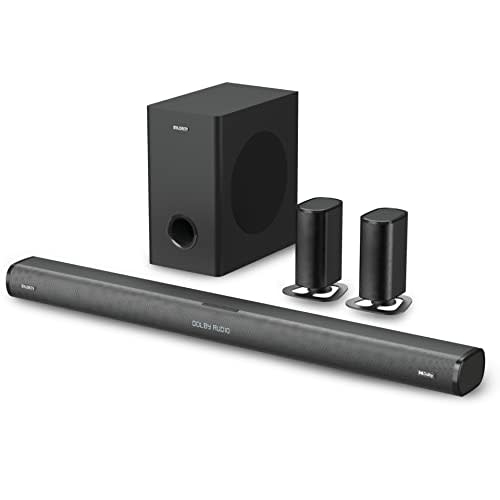 The Everest effortlessly adds 5.1-channel surround sound to your living room. Just plug in the satellites and subwoofer and you're done.