Yahoo's editors are committed to independently selecting wonderful products at great prices for you. We may receive a share from purchases made via links on this page. Pricing and availability are subject to change.
Nicole Lee
30 December 2022, 10:58 am·6-min read

The new year is almost here, and like many of you, my thoughts have turned to annual resolutions. This year mine is one of the most common resolves — to eat healthier. I'm starting on that plan by prepping a week of meals in advance so it's easier to grab a nutritious dinner instead of turning to fast food or delivery out of hunger and exhaustion at the end of the day. Cooking several meals at once is usually hard work, but not with a sous vide cooker.

Lucky for all of us who want to cook at home more — Anova, one of the highest-rated sous vide brands, is having a big sale to end the year. Their cookers are up to 50 percent off and their vacuum sealers are up to 33 percent off! 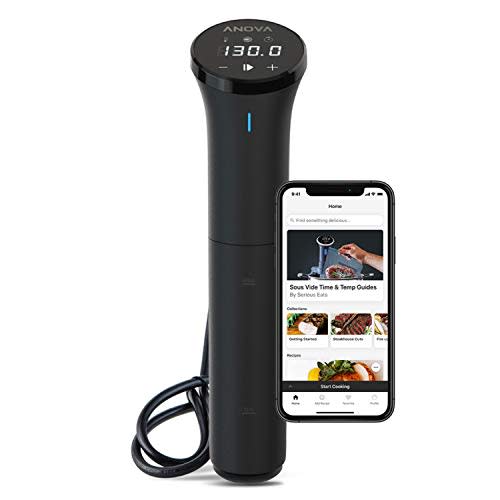 $99$149Save $50
The most affordable sous vide cooker is also one of the best. It's super easy to use and it's small enough to stow away in a drawer!
$99 at Amazon

Why is sous vide cooking so great for meal prep? Well, it's because this ingenious method lets you cook a whole bunch of protein at once without any of it being undercooked or overdone. Want to poach a pound's worth of chicken breasts at once? No problem. Cook a dozen jammy soft boiled eggs in one go? Sure thing. Make enough medium rare steak to feed an army? Absolutely.

All you have to do is attach the sous vide cooker to a large vessel — like a stockpot or heatproof plastic container — fill it with water and adjust the thermostat to your desired temperature. Seal your protein in a food-grade plastic bag and dunk it in. Wait a few hours, and voila, you'll be rewarded with perfectly done meals!

Bonus: Anova also has a useful batch cooking guide with links to recipes if you want to learn more about using sous vide to meal prep. Also, don't worry if you're new to sous vide, as the companion app is very beginner-friendly and will help you through cooking step by step.

As for which sous vide cooker should you buy? Well, it depends on your budget; the more you spend, the more powerful the machine. But any of these Anova cookers should more than do the job.

$99$149Save $50
The most affordable sous vide cooker is also one of the best. It's super easy to use and it's small enough to stow away in a drawer!
$99 at Amazon

Anova's Nano sous vide cooker is its most affordable option at just $99, but it's still considered one of the best sous vide cookers out there. You can easily control it via the companion app or use the on-board temperature controls. Plus, it's small enough to fit inside a kitchen drawer!

"I finally broke down and ordered this sous vide cooker about a month ago," said this five-star Amazon review. "I'm glad I finally took the plunge. I have already cooked 4 beef roasts (tritip and chuck, 137.5 degrees for 30 hours) and chicken thighs twice (145 degrees for 3 hours). Everything turned out great." 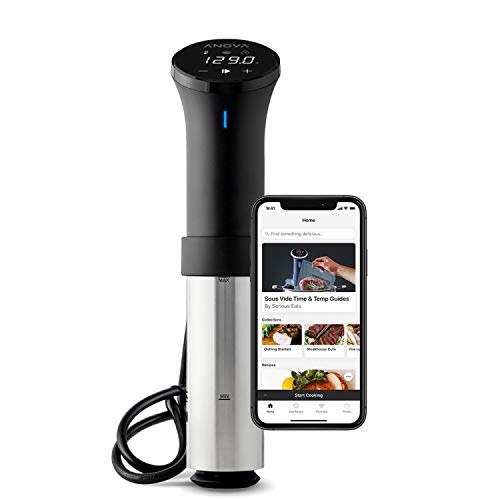 $129$219Save $90
This popular sous vide cooker heats water a little faster than the budget option, plus it has an adjustable clamp which easily attaches to any container.
$129 at Amazon

The next step up is the 1000-watt Anova AN500-US00 Precision Cooker, which heats up water faster than the Nano. Plus, it comes with an adjustable clamp, which makes it a touch more flexible as well.

It's a must for Thanksgiving dinner, according to one shopper that used it on a very pricey Wagyu roast.

"The roast was very expensive and the last thing I wanted to do was screw it up...I set it to 133 degrees, and it cooked for 8 hours, after which it went into a 550-degree oven for 15 minutes. It was absolutely perfect. I have done other foods, fish, chicken, and it always comes out delicious. If I can trust a VERY expensive roast to this device and have results like this, I can cook anything with it." 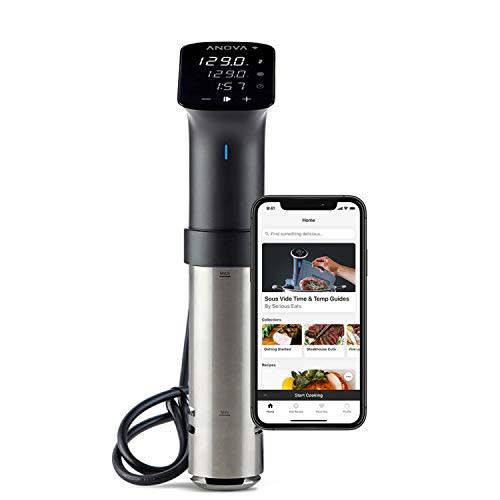 Anova's most powerful cooker, however, is the Precision Cooker Pro. With 1200 watts, it can heat up more water a lot faster than the rest. It's also the most durable, thanks to its stainless steel construction it can be dropped and dunked and still keep on functioning.

"I was on the fence for quite a while until family convinced me to get one," said this five-star review. "First test was a NY steak. Absolute heaven. Tender, juicy and just the right doneness. The second test was a pork tenderloin. Another winner! Hubby couldn't get enough of the tender meat (low and slow.) The true test was a center round cut for deli-style roast beef. It took a day, but it's perfectly done medium rare. Just had to sear it, refrigerate it, then slice it thin with our meat slicer. Better than the deli counter roast beef and it's half the cost. I'm sold on sous vide, and Anova has really surprised me with the Pro version and the app. Well deserved five stars from me." 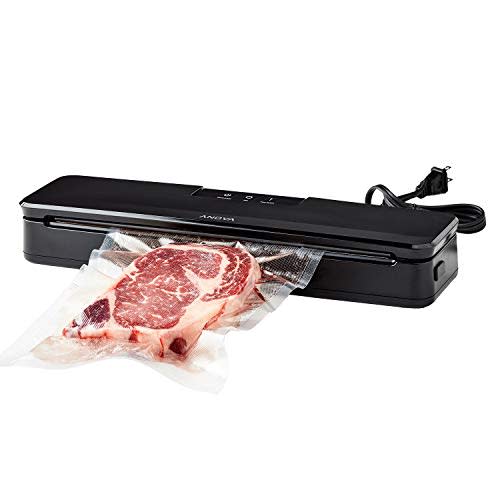 $80
A vacuum sealer will take your sous vide game to the next level. Anova's Precision Vacuum Sealer is perfect for the job; it's slim, affordable and comes with 10 bags.
$80 at Amazon

You could certainly use a sous vide cooker with just regular zipper lock bags, but a vacuum sealer like Anova's Precision Vacuum Sealer will take your sous vide batch cooking game to the next level. Just vacuum seal all of your meats, complete with seasonings, in separate bags. Then cook them via sous vide, stack them in the freezer and simply warm them up in a pot of hot water or sous vide them to briefly bring them up to temp. (The sealer is also excellent if you like to buy food in bulk since you can seal them and freeze them for later.)

That's what Billy W. said he did on Amazon: "This changed how we buy and prepare food. We buy meat, season it, vacuum seal it and freeze it for quick meals later. We are able to warm food in the bag or sous vide meats. Try salmon — it's awesome." 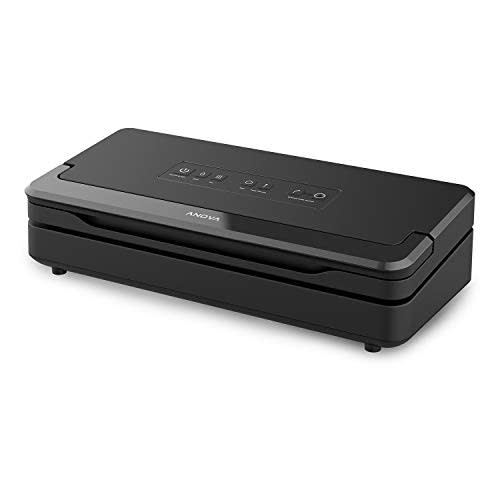 $139$150Save $11
The bigger version of the Anova vacuum sealers, the Vacuum Sealer Pro has a higher power vacuum, built-in bag storage and cutter plus an accessory port for sealing containers.
$139 at Amazon

If you want an even better vacuum sealer, you can opt for Anova's Vacuum Sealer Pro. It has a higher power vacuum plus built-in bag storage. It also has a cutter and an accessory port for sealing containers. You can also switch modes to a "wet function" which lets you activate a lower-pressure suction for marinating meats. The double sealer is especially useful in those cases since it'll help ensure the bags don't leak!

"OMGosh it is such a good sealer and so fast," said a verified shopper who gave it five stars. I purchased a cheaper one a year ago because I wasn’t sure how much I would use it, but I used it a lot. It was starting to wear out. Looked up reviews and this is rated #1. Since it was Christmas sales, I bought it. It is so easy and fast. The first time I used it to seal peanuts and its suction was so fast I gasped! Plus easier to insert the bag and use the handle versus pushing down to click on both sides. So much better!"

Whichever sous vide and sealer you choose, you won't go wrong. You'll be on your way to easier and healthier cooking in no time.