We may earn commission from links on this page, but we only recommend products we believe in. Pricing and availability are subject to change.
Rick Broida
29 August 2022, 3:57 pm·5-min read

I've tested a lot of laptops in the past 30 years, and few have made the same impression as the LG Gram 16Z90Q. That's because the system seems to defy logic: It's large, with a spacious 16-inch display and generous 80-Wh battery, so when you pick it up you expect heft. Instead, you find yourself holding something shockingly light. Indeed, at just 2.6 pounds, the Gram weighs less than many smaller laptops.

For example, the widely praised Apple MacBook Air and Dell XPS 13 weigh 2.8 and 2.9 pounds, respectively — but have 13-inch screens. The jump to 16 inches may not seem like much, but it affords considerably more space for things like spreadsheets, photo editing and multi-window workflows.

But is that enough to justify the Gram's not-so-lightweight $1,700 price tag (currently $1,500 at Amazon)? Short answer: If you can swing it, this is a fantastic laptop that should keep you working productivity for years. 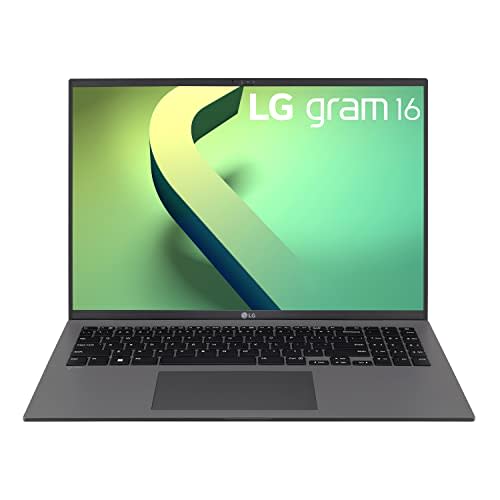 If your work would benefit from a big screen, look no further than LG's amazingly lightweight and powerful workstation. Magically, it packs a 16-inch display into a 2.6-pound frame.

I'll admit the Gram 16Z90Q doesn't score a ton of style points. Its steel-gray color looks a little drab, and the all-plastic exterior (necessary to achieve that amazing weight) feels insubstantial. Everything about it, including the generously sized touchpad, seems industrially rectangular.

But if it's not dressed to impress, it's definitely powered to please. Packing a 12th-generation Intel Core i7 processor, 16GB of RAM and a 1TB solid-state drive, the Gram runs about as fast as a modern PC can run. If there's a shortcoming, it's the integrated Intel Iris Xe graphics subsystem: It's ample for everyday computing, but insufficient for the likes of high-end gaming. On the flip side, there's a slot available for adding a second SSD, great if you end up needing more internal storage.

The anti-glare screen is a marvel, running at 2,560 x 1,600 native resolution with a 16:10 aspect ratio. Honestly I like that better than 16:9, as it not only affords more pixels but also puts more of your workspace "front and center." There's barely any bezel around the screen, meaning it appears to extend nearly edge-to-edge (despite squeezing a Full HD webcam into the top). It's not a touchscreen, though, something to consider if you prefer tapping to clicking.

As for typing, the Gram's spacious backlit keyboard should please most audiences. I liked the travel and responsiveness of the keys, though I wouldn't have minded a hair more space between the main keyboard and dedicated numeric keypad. The good news is there's a ton of space beneath the keyboard to rest your palms, which otherwise would cut into the rather sharp corners of the frame.

The Gram also boasts an extremely large touchpad, with a smooth and responsive surface. This is great for things like two-finger scrolling, where a smaller pad can feel confining. There aren't any physical buttons, however, so you have to press the pad itself for left and right mouse-clicks.

In my tests, the system ran like a rabbit, booting in seconds and loading programs just as speedily. I often gauge PC performance by how quickly and smoothly a web page responds to two-finger trackpad scrolling; this one scrolled like butter. Similarly, I opened about a dozen tabs and hopped between them at varying intervals; no performance hit to speak of, no delays when switching tabs.

Despite relying on a pair of downfacing speakers, which would normally result in rather muffled audio, the Gram delivered decent audio. There's little bass to speak of, though that's true of most laptops, and I suspect most users will be much happier with headphones. But if you're just hopping on a Zoom call or listening to a quick YouTube video, the built-in speakers aren't bad at all.

My only real usability complaint is with the system fan, which ranges from a little to a lot noisy when it kicks on. The good news is that LG's Smart Assistant software lets you tweak various system settings, including fan speed (which does have a "silent" mode). That utility is also home to some other helpful tools, like turning the screen off automatically when you step away and a Reader Mode designed to reduce eyestrain.

Regarding the aforementioned 80-Wh battery, which is larger than most, LG promises anywhere from 13 to 20 hours of runtime depending on your activity. Although I didn't have the tools needed to run a full gamut of battery tests, results I've seen elsewhere peg the system as decidedly long-lasting. For example, you should expect anywhere from 9 to 14 hours of video playback depending on certain variables (screen brightness, streaming vs. local files, etc.).

All this adds up to a genuinely great laptop that's one of the best I've tried in recent memory. Its premium price tag might put it out of reach for some buyers, but if you want a larger-than-average screen in a lighter-than-average system, it's worth splurging on the LG Gram 16Z90Q.

If your work would benefit from a big screen, look no further than LG's amazingly lightweight and powerful workstation. Magically, it packs a 16-inch display into a 2.6-pound frame.