For years, I dismissed air fryers as just another fad. After all, they’re just mini convection ovens, I thought to myself. I already have a toaster oven with convection mode; why do I need a newfangled appliance that just does one thing? Well, I had the chance to try out the latest Instant Vortex Plus 6-Quart with ClearCook and OdorErase, and let me tell you folks, it’s changed my mind completely. Bonus! Amazon just slashed the price of it for Prime Day.

Prime Day at Yahoo: Follow our Live Blog for the best deals in real time, shop Amazon’s top 150+ deals for today, and see all of our coverage, here. 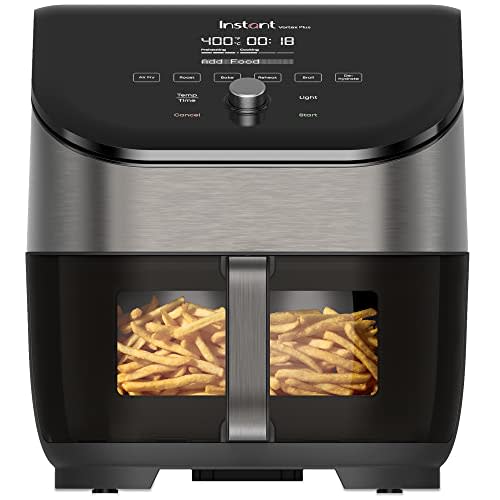 It is far superior to my existing oven in many ways – it’s faster, the food is crisper, and best of all, clean-up is a breeze!

I used to have to preheat my oven for a while in order to get it up to the desired temperature. But the Instant Vortex Plus heats up so quickly – we’re talking five minutes! – I just put in my food right in the beginning and that speeds the cooking process considerably.

Having had experience with other air fryers, I know that sometimes the fan inside the machine can be very loud. This latest Instant Vortex Plus, however, is actually not too noisy. It’s not super quiet or anything, but I can still watch TV without having to increase the volume.

Best of all, the latest Instant Vortex Plus has odor-erasing filters! One of the biggest flaws of most air fryers and convection toaster ovens is that cooking something greasy (like chicken wings) can produce a lot of smoke. I’ve often had to open the windows and turn on the air vent so that they don’t trigger the smoke alarm! But I’ve had no such issue with the Instant Vortex Plus. There was a bit of cooking smell, so the filters didn’t remove the odor completely, but it was far less than in other air fryers and ovens. No more opening the windows for me!

On top of that, the food is delicious! The chicken wings I made in the Instant Vortex Plus were so much crisper than the ones I made in the oven, and they were juicy too. They’re easily some of the best wings I’ve ever made.

I also love that this model of the Instant Vortex Plus has a ClearCook window. This lets me see how my food looks without having to interrupt the cooking process.

The 6-quart model worked out perfectly for us too. It’s big enough to fit four chicken thighs, and one pound of wings. It can easily feed a family of four.

So far, my favorite thing to make in the air fryer is frozen chicken nuggets: I can have them ready in just eight minutes. That’s faster than ordering delivery or getting takeout. I might never order fast food ever again!

If you’re not yet an Amazon Prime member, sign up now for exclusive members-only access to Prime Day deals. Click here for a free 30-day trial.